The Five Phases of Magic the Gathering 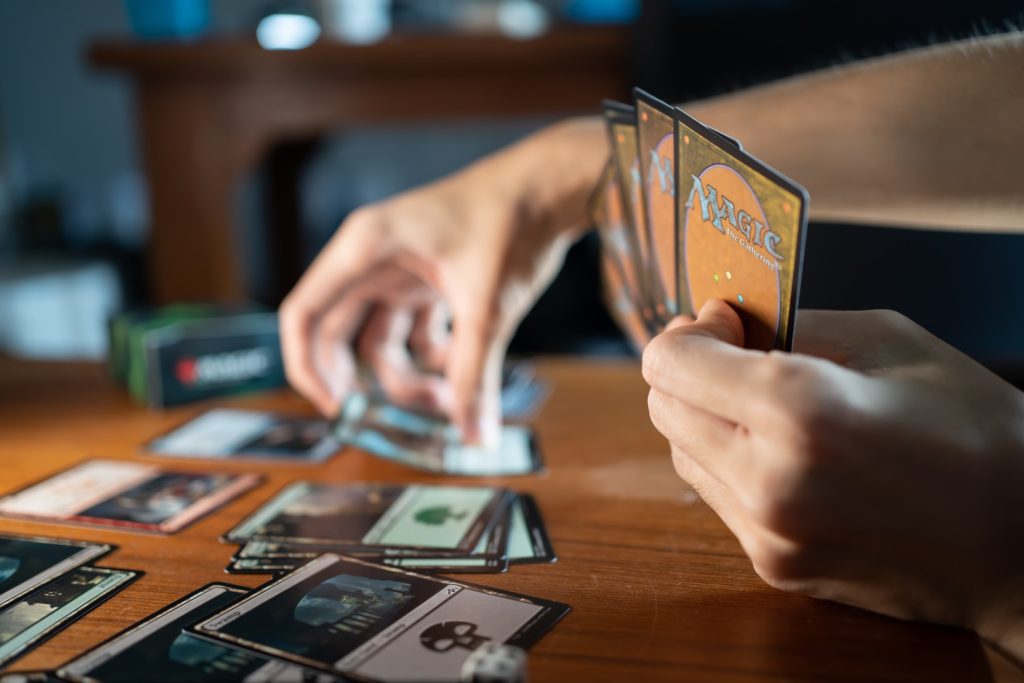 It’s no secret that Magic: the Gathering is a complex game–the world’s most complex, according to some. It doesn’t help either that each turn is divided into five phases or that each phase is further subdivided into steps. Throw the concept of priority into the mix, and you can see why playing a four-player commander game can melt beginners’ brains.

Still with us? Fantastic, let’s untap and go to our upkeep.

The beginning phase mostly happens quickly and without much decision-making. It consists of three steps: untap, upkeep, and draw. In more restricted formats like standard and limited, you’ll barely even notice the beginning phase and simply turn your permanents vertically before drawing a card and proceeding with your turn. Occasionally you might encounter triggered abilities that read ‘At the beginning of your upkeep . . .’, such as Bitterblossom (below).

Commander games are notorious for creating complex situations that cause multiple upkeep triggers to stack. Remember that if it’s your turn, you get to choose the order in which these triggers resolve.

Moving on, you can breeze through the beginning phase in most situations as long as there’s nothing to worry about in your upkeep. However, beware that an experienced opponent may cast instant speed spells in your upkeep and draw phases, which is particularly annoying if it’s a discard spell and you’re forced to discard the card you just drew before your pre-combat main phase or if they tap your lands.

If nothing is stopping you, just untap, upkeep, draw and go to your pre-combat main phase.

All right, we’ve untapped, drawn, our opponents have had their first chance to mess with us, and now we get to play the game. This is the first opportunity we have to play sorcery-speed permanents and spells like our one land per turn, creatures, enchantments, artifacts, planeswalkers, and, of course, sorceries. Anything that you can’t play at instant speed can only be played in one of your main phases while the stack is empty.

However, that doesn’t mean that you should always play something in your pre-combat main phase; you’ve got another after combat called the post-combat main phase. For example, you should consider playing your creatures post combat if they don’t have haste or impact combat in some way, i.e., not Elesh Norn.

Saving plays that don’t influence combat until after combat is a good habit in Magic. The primary reason is that the less your opponents know, the less informed their blocking decisions are. Suppose you carelessly play a creature that does nothing in your combat phase before combat. In that case, your opponent will be able to factor that additional creature into their blocking decisions when considering the backswing.

Although Magic isn’t mainly a bluffing game, holding back your cards and mana sources until after your attack will undoubtedly put your opponent on edge as they declare blockers.

Do you have a combat trick? Do you have something with flash? Do you have removal? All these additional variables will certainly make their blocking equation more complex.

If this article hasn’t thrown you off so far, then congratulations, but the combat phase might because it has five steps: the beginning of combat, declare attackers, declare blockers, combat damage, and end of combat. That’s a lot to take in, so let’s break it down one step at a time.

Not much happens here unless there are triggered abilities that say ‘at the beginning of your combat step . . .’, which aren’t the most common, such as the Equipment card Helm of the Host.

In paper Magic, it’s essential to say ‘Move to combat’ or however you prefer to indicate that you’re ending your pre-combat main phase. The reason is that you must pass priority to your opponents so they can tap your creatures with Cryptic Command or kill your Ragavan so you can’t dash another.

This is particularly important in multiplayer games like Commander when you don’t know if someone will attack you or someone else; too late to rewind if they choose to attack you, and then you ask if you can tap their creatures out with Cryptic Command.

Your opponent(s) get priority in between these steps, so make sure that you know exactly when the right time is to cast your removal or combat tricks. If the step goes to blockers and your opponent blocks, it’s too late for removal to stop your creature from being considered blocked.

This phase is identical to your pre-combat main phase, but ideally, you should be playing spells here that you didn’t need to cast before your combat step, such as creatures without haste that don’t impact the battlefield, e.g., Argivian Archaeologist.

We’re on the home stretch now; this phase only consists of the end and cleanup steps. In most cases, nothing much happens here: damage is removed from creatures, ‘at the beginning of your end step . . . ‘ stuff triggers, but most commonly, your opponent will cast something at instant speed to mess with you at the end of your turn.

Control players, in particular, will usually pass without casting anything on their main phase so they can keep their mana available to count your spells and disrupt your creatures in your turn, tapping out only on your end step.

After you regain priority, you move to the cleanup step, and all damage is removed from your creatures. Then the turn is passed to the next opponent.

A step is a subdivision of a phase where certain things happen in a specific order. So, for example, the beginning of the combat step is the first step of the combat phase and is followed by the declare attackers step, and so on.

The reason why this is important to understand is that some abilities can only be activated at specific steps or phases. For example, you can’t activate an ability that reads “at the beginning of combat” during declare blockers.

Conversely, you might have an ability that specifically targets something happening during the declare blockers step. This could be useful if your opponent tries to remove one of your creatures after you’ve already declared it as an attacker but before they get to declare blockers.

More confused than when you started reading this? That’s fine; this isn’t an aspect of the game that is easily explained on paper. The best thing to do is install Magic Arena and play it until you know it by heart.

The game automatically moves you through steps you can’t do anything in, but you can press CTRL at any time to activate full control mode so that you always take priority when possible. The game is free (ish) and comes with a load of ready-to-play decks, so you can’t go wrong.

If you want to learn more, we wrote a blog about the history of Magic the Gathering. Check it out!

I hope this was helpful. Make sure to get your hands on our MTG Proxy Cards, they can really help a new player stay competitive.