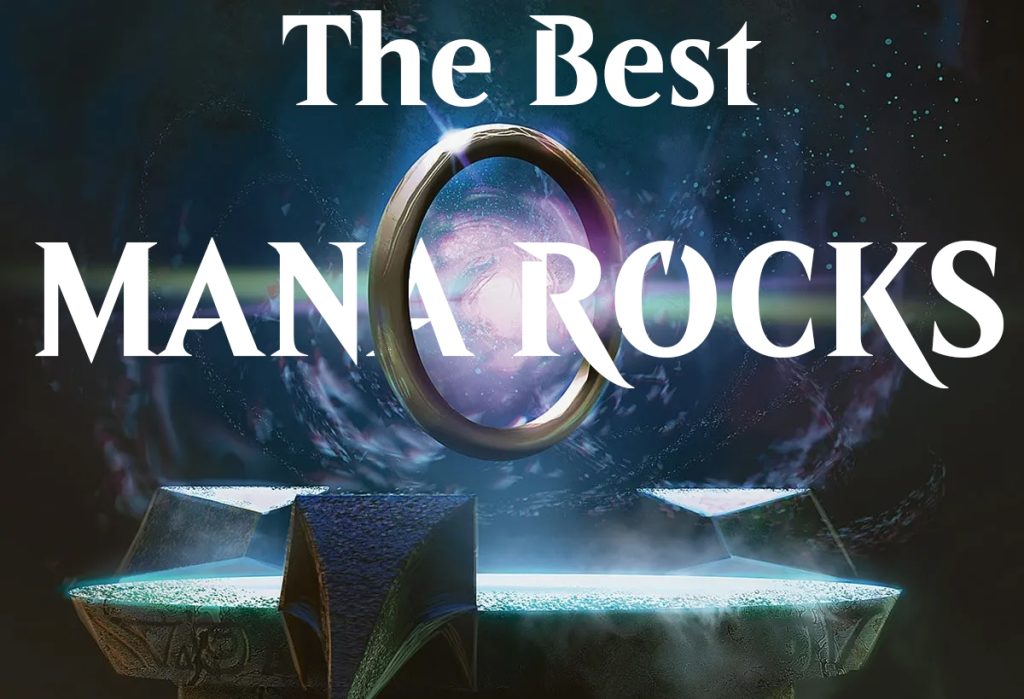 If you want to build a competitive MtG deck in Commander, ramp is super important. Mana rocks are artifacts that can produce mana. This can give you a leg up early in the game because you can play as many of them on your turn as you can afford.

Mana rocks let you drop beefier creatures or spells faster than your opponents. As a result, they are central to virtually any competitive constructed format.

The most broken mana rocks must be the OG Moxen from Power 9. But, of course, these are banned in most formats, so we won’t be covering them today.

I’m writing this article with Commander in mind. EDH (and cEDH) is the perfect format for Mana Rocks since you can use so many different ones. Of course, you can totally apply this information to other formats like Pioneer and Modern.

Without further ado, here is the list. Read on for all the details.

This section is reserved for what I am calling the Holy Trinity. These three mana rocks have virtually no downsides.

Sol Ring epitomizes Commander like no other card. It comes with almost every preconstructed deck and is practically mandatory for casual and competitive play alike. You can drop a 4 CMC bomb on turn two. Or, if you get lucky on the draw, it can lead to an even more epic start. Turn 1 Sol Ring, tap for two, cast Talisman of Dominance, tap for one, and cast Mana Vault. Your opponents will be crapping bricks, wondering what is coming on turn two with eight mana.

Some people want it banned, but let’s all admit that it makes the game more interesting.

Mana Crypt is a high-risk, high-reward addition to any deck. It costs zero mana to cast and can tap for two mana immediately. Of course, the lightning bolt damage risk is a downside. That said, it accelerates the game. It gives you lots of mana off the bat but also hits your life total on a coin flip each turn. The downsides of Mana Crypt on muted in Commander since you start with 40 life.

The real reason most folks don’t run it is that it’s expensive. So get a Mana Crypt proxy for a few bucks and boost your game.

This may be the best mana-fixing rock out there. It’s not as busted as the above two cards, but still great. In particular, for multi-colored decks – for three, four, or five-colored decks I’d call this mandatory.

Arcane Signet is better than other signets because it can be tapped on the turn it’s dropped.

The Medallions aren’t technically mana rocks since they don’t produce mana. But I generally lump them in because the outcome is pretty much the same. The medallions have the effect of reducing the mana costs of spells. Since this effect applies to all spells played on a turn, they can actually do MORE work than typical mana rocks.

Medallions also grow in power throughout the game. With a Sapphire Medallion on the board, for example, you may play 1 spell per turn early game, 2-3 spells on a turn midgame, and more late game. Each of those spells’ CMC is reduced.

Medallions also stack. So if you have a bunch of multi-colored cards, you can bring down your mana costs by having several Medallions on the board.

If you can’t tell, I’m a big fan of Medallions. You can get the set of 5 Medallions in our shop for $15.

Chrome Mox is a great, affordable, mana rock that works in any format. The best part about Chrome Mox is that it is a zero mana artifact. It can also help with mana-fixing, which is excellent for early game.

It works through its ‘Imprint’ ability. This lets you effectively cycle a dud card in your hand for a powerful mana rock.

Mox Diamond is basically an auto-include for cEDH. It’s a free mana rock that taps for any color. In many cases, this is well worth the price of a basic land. It’s excellent for mana fixing and has seen a lot of use in 4 color partner builds.

For more casual Commander pods, Mox Diamond also has its place. But it will be more dependent on the deck that you are running.

Lion’s Eye Diamond doesn’t get much play simply because of its massive price tag. You’ll be lucky to get your hands on one for $500. Luckily you can get our proxy version for just four doll hairs. That said, it is a very useful card in certain situations.

In this case, it is practically better than a Black Lotus, because it can get key cards into your graveyard on the first turn.

It’s also a shoo-in card for an “Ad Nauseam” based deck. It’s a good card to draw into because it doesn’t cause you to lose life and it increases your storm count.

Finally, use it with Infernal Tutor to turn it into Demonic Tutor, and net one mana.

The card is the GOAT of certain decks. A mono green, or stompy deck will make the Great Henge broken.

If you can reduce it’s casting cost by five or seven it’s definitely worth dropping, simply because the abilities are so powerful. It lets you ramp, and get card draw advantage.

That said, it’s not a good card outside of those specific decks. It’s just too mana intensive to play. Plus artifacts are very susceptible to cheap removal.

There you have it, folks. My picks for the best mana rocks for Commander. Let me know what you think. Did I miss some obvious ones? Do you think I am overestimating the power level of any of these? Leave a comment below.