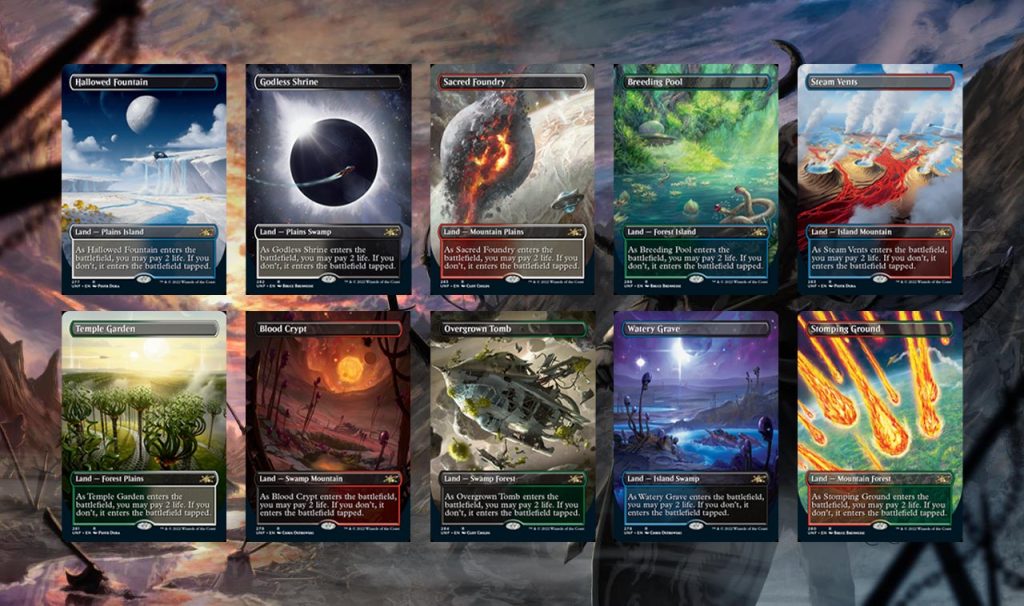 In this article, you’ll find all 10 Unfinity Space shock lands. We’ll also discuss where you can get them and what the odds are to open them in a booster. These are truly some of the most amazing dual lands we’ve ever got, so let’s get right to it.

Here are all ten of the Unfinity space shock lands! (They are called space lands, because they’re set in space, of course.) You can let us know which one is your favorite in the comments below.

Where to Get Unfinity Shock Lands?

Unfinity set has two types of boosters: Draft boosters and Collector boosters. You can get a full art Unfinity shock land in both of these, but they do have different odds.

On the other hand, each Collector Booster has two slots, where you can get a foil space shock land. (One for a traditional foil, and the other for the galaxy foil.) This means that you have a higher chance of a shock land— 8.2%. Plus, it’ll be foil!

Of course you can also get your hands on a set of proxies right here at Proxy King. Click on the image below for more information.

There’s an additional way to get Unfinity space shock lands. That’s with a Box Topper. What is a Box Topper? Well, it’s a special booster that contains a single foil borderless shock land.

You can get a Box Topper by buying either Unfinity Draft booster box or Unfinity Collector booster box. This means that if you buy a whole booster box of Unfinity, you’ll get a guaranteed foil shock land. That’s a pretty nice way to ensure that you won’t get hit too much by variance. Even if you get a not-so-great booster box, you still got a foil space shock land.

Here’s an overview of the odds for each of the two boxes. Note that the number you’ll get from boosters is what you’ll get on average, in any one specific box you could get more or less shock lands.

So, which box should you get? That depends on what you want to get out of it. Draft booster box is better if you want to draft, or if you want a cheaper box. However, if you’d like to get as many exciting cards as possible, go with the Collector booster box.

Here’s a quick recap of some of the most commonly asked questions about the Unfinity shock lands. If you didn’t find what you were looking for, feel free to leave a comment below, and we’ll try to answer it quickly.

Where can I get Space Shock lands?

You can get it as a Box Topper by buying Unfinity Draft booster box or Unfinity Collector booster box. Both boosters also have a chance of containing shock lands.

What are the odds of getting a shock land in an Unfinity Draft booster?

What are the odds of getting a shock land in an Unfinity Collector booster?

Where are Unfinity Shock lands legal?

They are legal in any format that shock lands are legal in. This includes most of the big formats, except Standard. This means that they will be legal in Commander, Modern, Legacy, Vintage, Pioneer, and other formats.

What are shock lands?

In Magic: The Gathering, Shock Lands are a type of dual land that were first introduced in the Ravnica block. They include cards such as Blood Crypt, Steam Vents, Temple Garden, Breeding Pool, Overgrown Tomb, Godless Shrine, Watery Grave, and Stomping Ground.

Shock lands enter the battlefield tapped, but they can be used to produce either color of mana that corresponds to their land type, for example, Blood Crypt produces either Black or Red mana. However, they have the added ability that when they enter the battlefield, they deal 2 damage to the player who controls them. This drawback is usually balanced by their flexibility as they can produce any color of mana, making them a staple in many multicolor decks.

In addition, shock lands are also valuable in the Legacy and Vintage formats, which allow players to use cards from all Magic’s history, as they are one of the few ways to access all five colors of mana, which is essential for the format’s strategies.

In summary, Shock Lands are dual lands that provide players with access to all five colors of mana, they have the drawback of dealing 2 damage when they enter the battlefield, but this is balanced by the flexibility they offer in multicolor decks. They are considered a staple in many formats and are highly sought-after.

Check out our in depth article on shock lands here.

That’s all about Unfinity space shock lands. Don’t forget to let us know which is your favorite one in the comments below.

Until next time, have fun and may you open your favorite shock land in your next Unfinity booster.